Virginia Woolf wrote ‘A room of one’s own’ (which I must re-read).  It is a long essay arguing for the importance of intellectual freedom and financial independence for women.  At the time that she wrote, this sentiment, was radical; that one could be in a couple and yet have a room of one’s own.  Life has moved on and yet still today, I wonder as to the extent we really do claim that actual or metaphorical room in our relationships.

My room, his room

This is part of one of ‘my rooms’:

Buddhas, candles, a vision board, as well as an old bird’s nest, some dried flowers, feathers, conkers and stones and water.

Here is part of his room: 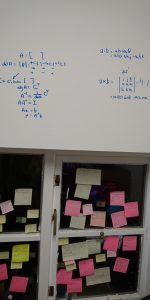 Post-it notes on the window and vector and scalar (??!! I’m clueless) equations on the wall.

No wonder we have rooms of our own actually and metaphorically.

We are lucky to have the literal rooms that we can call our own; they have helped us by providing the space that we each need in the chaos of family living.  The kids each have a room of their own but so many adults give that up when they get together and share a bedroom as well as the rest of the house.  For some people this works; for us it wouldn’t have.

He likes to work with the radio on, I like silence.

He has pages of arcane glyphs, I have a note books of mindmaps in different colour pens.

He works with one dog at his feet, I like the other dog curled up next to me. 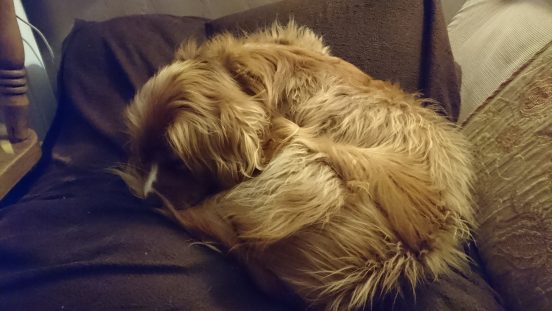 It is sometimes a marvel that we get on at all (and sometimes we don’t).

But the one of the things we really hold to be important is our intellectual freedom; our right to pursue and be interested in something without needing the other’s approval.  He is supporting me in learning Indian Head Massage and I am supporting him in learning robotics.

The critical thing isn’t so much what we are learning, but the fact that we are both learning and that thinking and learning are important to us both.

We both love learning and neither of us would tolerate being told what to learn, how to learn or when to learn, this freedom to think for ourselves is fundamental.

What is the truth?

Yet, sometimes it is hard to know how intellectually free it is possible to be.  The news contradicts the images circulating on Facebook of what is happening in Syria.  Bruce Lipton at HayHouse says one thing and his detractors laugh at him. The American elections seem to be a pantomime of things to disbelieve. My kids are currently scared of killer clowns which I laughed off until it turns out there really are people in town centers dressed as clowns trying to scare people.  Sometimes it is hard to know what the truth is.

So one of the crucial capacities I would like my kids to develop is the ability to think for themselves, to look for evidence, to weight up all arguments, to be discerning and to be prepared to fight for their intellectual freedom.

Freedom to think and learn

And it is a right that people have fought for.  The first thing that Pol Pot did was kill the intellectuals.  Women in this country have fought and are still fighting for their voice to be heard and Malala stood up for her right to think for herself and to represent all the girls and women who don’t have voices of their own.

We may not have to take the risks that Malala did to stand up for our right to think for ourselves, but we do have to fight for our right to think for ourselves in all situations, whether at work or in a relationship.  To turn over our thinking to our partner or our boss is to give away part of our self, a part that so many women round the world would like; our right be an autonomous, free thinking individual.

This fear, is I am sure, one of the reasons why people don’t keep their intellectual freedom in relationships, the fear that it will rock the boat and end in disagreements.  And in this house it does both those things; the boats goes through some very stormy seas but I would rather the turbulence than be a dinghy towed along behind another ship.  I would rather have the conflict than a fake harmony. I would rather have more voice and my right to express myself.

‘I [may] disapprove of what you say, but I will defend to the death your right to say it.’ (Evelyn Beatrice Hall or Voltaire, appropriately there is disagreement about whose words they were!).

By continuing to browse the site you are agreeing to our use of cookies.